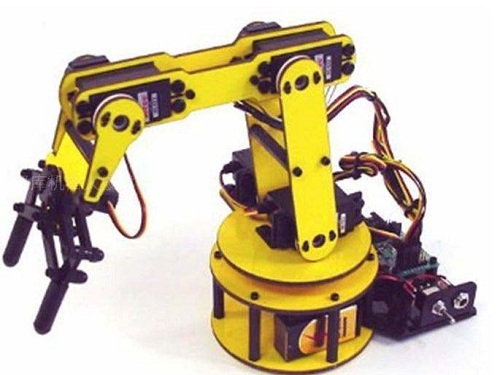 The robot industry is an important component of the intelligent manufacturing equipment industry. The development of the robot industry can not only promote the automation level of various industrial industries, but also produce a good technology spillover effect, which will drive the transformation and upgrading of the entire industry.

I. Overview of industry development

At present, all countries are taking the robot industry as the focus of R&D and industrialization in the occupation technology and market commanding heights. The "Advanced Manufacturing Partner Program" promoted by the United States requires the development of industrial robots to restructure the US manufacturing industry and develop a new generation of intelligent robots based on mobile Internet (3378.63, 7.980, 0.24%). China has incorporated the robotics industry into the key areas of strategic emerging industry development and proposed to vigorously promote the R&D and industrialization of automatic control systems, industrial robots, key components and other devices. The major industrial provinces in China are striving to seize the opportunities in the robotics industry. The coastal provinces and cities have already made key investments and industrial layouts in the field of robotics and industry, and have initially formed a regional characteristic industry. Liaoning Province is building a characteristic robot industrial base in Shenfu New City; Zhejiang Province has started the â€œmachine substitutionâ€ project; Guangdong Province has focused on the development of multi-purpose robots; and Jiangsu, Shanghai and other places have also promoted the robot industry as a strategic emerging industry development focus. In the next 5-10 years, it will be the golden decade for the development of China's robotics industry.

(I) Scale and Development Trend of International Market

In 2013, global robot sales increased by 12% to 1,781,132 units, of which approximately 70% were sold to Japan, China, the United States, South Korea and Germany. Sales of industrial robots in the automotive, chemical, plastic, and food industries continued to increase, and the number of robots installed in the electrical/electronic industry also increased. During the period of 2008-2013, the average annual growth rate of robot installations was approximately 9.5%. The development of the automotive industry and the electrical and electronics industry is a major factor in the strong growth in the installed capacity of industrial robots. In addition, the demand for metal processing, chemical plastics and other industries has also rapidly increased.

The industrial robot industry has certain cyclical characteristics and has a high degree of correlation with macroeconomic and fixed asset investment. Manufacturers in the automotive industry, such as automobile parts and components, home appliances, hardware, and door industry, are major downstream customers of the industry. When the macroeconomic downturn occurs, downstream demand will slow down, which will affect their enthusiasm for the construction, reconstruction, and expansion of automated production lines. In turn, it has a certain degree of negative impact on the production and operation of enterprises in the industry.

At present, most of the domestic industrial robot industry is dominated by small and medium-sized enterprises, and no dominant brand has yet been formed. The high-end market is occupied by large-scale enterprises in Europe, America and Japan with a certain scale of advantages and high technological levels. There are not many domestic companies that are capable of undertaking large-scale projects and providing customers with automated total solutions. The domestic industry as a whole is in a period of development and faces certain risks of vicious price competition.

The development of industrial robots and industrial automation industries requires the mastery of high-quality, high-skilled, multi-discipline comprehensive professional personnel in the fields of advanced system control software, equipment machinery, and industrial automation system engineering integration. At the same time, when providing industrial customers with integrated automation solutions, they also need marketing talents who can accurately grasp customer needs, production processes and product features, and have rich project management and industry experience. The above-mentioned types of talents need to undergo industrial experience for many years to precipitate, and the number of talents is limited. With the development of the industry in the future, talent competition will become increasingly fierce, and the risk of brain drain will further increase.

In 2014, the average wage of employees in China's manufacturing industry was 51,369 yuan, which was an average annual growth rate of about 14% compared with 15,934 yuan in 2005. As cheap labor becomes increasingly â€œexpensiveâ€, coupled with rising land costs and other manufacturing costs, the transformation of manufacturing industries is imperative. The introduction of industrial robots instead of labor has been proved to be a feasible path by various countries. At present, the use density of industrial robots in China is still far below the global average, and there is a big gap from developed countries such as Japan, South Korea, and Germany. South Korea is the country with the highest density of industrial robots in the world, with 347 robots per 10,000 workers; Japan is second with 339; Germany is ranked third with 251; China is only 21, less than the international average of 55 Half of the station. At present, the proportion of industrial robots used in China is 6%, Japan 33%, the United States 16%, and Germany 14%. China is a global manufacturing country. In 2014, the number of manufacturing workers in China was about 50 million. It is estimated that a large number of robots can be used to replace human industries. The number of workers in industries such as automobiles, electronics, chemicals, and foods is as high as 30 million. If the average robot density of these industries reaches 100 units per 10,000 people before and after 2020, it will probably require 300,000 robots, plus robots equipped with automated equipment, with a space of about 300 billion.

(B) The policy benefits continue to emerge, the industry has a bright future

"Made in China 2025" proposed to "focus on automotive robots, machinery, electronics, dangerous goods manufacturing, defense industry, chemical industry, light industry and other industrial robots, special robots, as well as medical and health, family services, education and entertainment services, such as robot application requirements, and actively develop The new products will promote the standardization and modularization of robots and expand market applications.â€ The Ministry of Industry and Information Technology's â€œGuidelines for Promoting the Development of Industrial Robot Industryâ€ further elaborates specific strategic objectives: â€œBy 2020, a more complete industrial robot industry system will be formed. Cultivating 3-5 internationally competitive leading enterprises and 8-10 supporting industrial clusters; the technological innovation capability and international competitiveness of the industrial robot industry and enterprises have been significantly enhanced, and the market share of high-end products has increased to over 45%. The density (the number of robots used per 10,000 employees) reached more than 100, basically meeting national defense construction, national economic and social development needs." Regardless of whether it is from top-level design or specific industrial planning, the robotics industry has received great attention and support. The development goals and paths are clear and the development prospects are broad.

(C) With the help of the capital market, the industry accelerates integration

Benefited from the huge market space of domestic robots and the stimulation of constant favorable policies, the industrial robots market in the capital market is surging in the listing, listing, and mergers and acquisitions, and the integration of capital, technology, and markets has accelerated. The above integration presents the following features: First, listed companies actively participate in overseas mergers and acquisitions, absorb high-quality core technology from abroad, and speed up the distribution of core components and high-end robot markets. The PE level of purely robotic enterprises in China's capital market has remained at 40-50 times for a long period of time, which is higher than the average level of 20-30 times that of foreign countries and provides a rich source of funding for the acquirer. Some listed companies use their financial advantages to accelerate their deployment and launch competition for some of the core components and the high-end robot market. Second, some high-quality small and medium-sized enterprises have used the opportunities for the development of the new three boards to list their brands, speed up their distribution in different market segments, and differentiate their development. There are hundreds of industrial robot companies in China that target different subdivided industries. These robot companies are usually system integrators who have grown up relying on project experience in a subdivided industry. These companies are subject to cost, pricing, and other aspects. Disadvantages often face the situation of lack of funds and insufficient production capacity. With the construction of China's multi-level capital market, the New Third Board Market provides a suitable path for such enterprises and rapid development. It is expected that in the future, it will Gradually emerging high-quality small and medium-sized industrial robot companies in various sub-sectors.