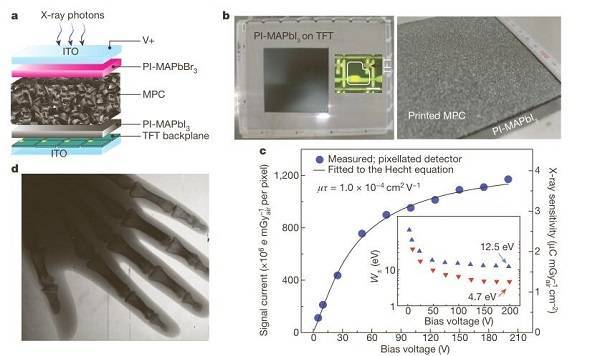 Samsung's cutting-edge technology research institute In Taek Han and South Korea's Sungkyunkwan University's Nam-Gyu Park (communication newsletter) and others reported a synthetic route for full solution processing (as opposed to traditional vacuum processing) to produce printable polycrystalline calcium and titanium. Minerals, which have similar morphology and optoelectronic properties to single crystals. The high sensitivity of 11Î¼C mGyairâˆ’1 cmâˆ’2 is achieved by irradiation with a 100 kV source, which is at least an order of magnitude higher than the sensitivity achieved by the currently used amorphous selenium or antimony doped cesium iodide detector. In a conventional thin film transistor substrate, X-ray imaging is achieved by embedding an 830 micron thick perovskite film and an intermediate layer of two other polymer/perovskite composites in the perovskite film and controlling darkness. A conformal interface is provided between the electrodes for current and charge carrier transport. This full solution based perovskite detector enables low dose X-ray imaging and can also be used in photoconductive devices for radiography, sensing and energy harvesting. 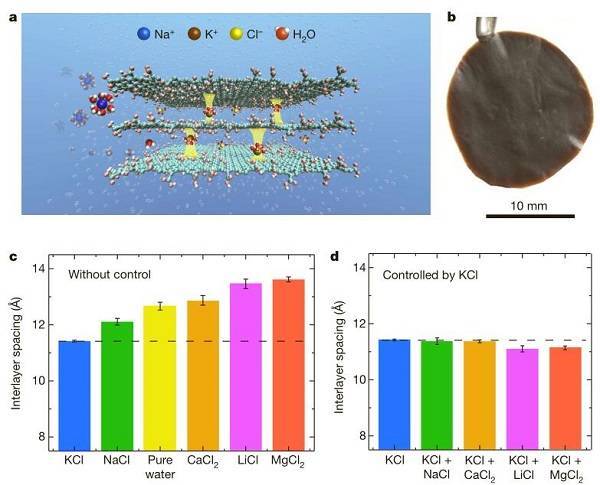 Fang Haiping, Jingye Li of the Shanghai Institute of Applied Physics, Chinese Academy of Sciences, Wu Minghong team of Shanghai University, Jin Wanqin team of Nanjing University of Technology (common communication) and others used K + , Na+, Ca2+, Li+ or Mg2+ ions to show the precise use of cation control layer spacing It is equipped with a graphene oxide film and exhibits excellent ion sieving and desalination properties. Furthermore, the membrane spacing controlled by one type of cation can effectively selectively exclude other cations having a larger hydration volume. First-principles calculations and UV absorption spectroscopy indicate that the most stable cation adsorption sites are where the oxide and aromatic rings coexist. Density functional theory calculations show that other cations should have a stronger cation-Ï€ interaction than graphene sheets than Na+.

Professor Zhang Xiang (communication author) of the University of California at Berkeley reported a demonstration of the phase transition between a monolayer of molybdenum (MoTe2) driven by electrostatic doping and a monoclinic phase. It has been found experimentally that the phase transition exhibits a hysteresis loop in the Raman spectrum and can be inverted by increasing or decreasing the gate voltage. Combined with the second harmonic spectrum and polarization Raman spectroscopy, it is found that the monoclinic phase after phase transformation retains the crystal orientation of the original hexagonal phase. In addition, more importantly, the entire experimental sample produced a structural phase transition. The results of this research have confirmed the theory in experiments, and the phase transition from electrostatic doping-driven structure to the development of phase-change devices based on atomic thin films opens up new possibilities.

Researcher at the National Institute of Materials Science, Institute of Metal Research, Chinese Academy of Sciences, Lu Lei, Research Fellow, and Professor Gao Huajian (Common Communications), Brown University, USA, through atomic simulation and pull at stress amplitudes below the tensile strength of metals The pressure-variable amplitude-strain-controlled fatigue experiment reported a stable cyclic response unrelated to fatigue history in a highly oriented nanocrystalline bulk copper sample. Experiments have shown that this unusual cyclic behavior is caused by adjacent "necklace" dislocations, which are made up of multiple short dislocations in the twins, such as the connection of a necklace. Such dislocations are formed in highly oriented nano twin structures under cyclic loading and help to maintain stability and reversible damage to the double boundary, provided that the nano twins are tilted within about 15 degrees of the loading axis. This cyclic deformation mechanism is quite different from the conventional deformation mechanism associated with irreversible microstructure damage in single crystal, coarse grain, ultrafine grain and nano metal grain. 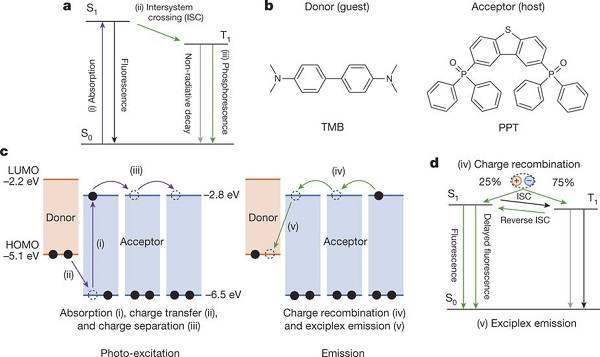 Kyushu University's Ryota Kabe and Chihaya Adachi (co-author) reported an organic long-lasting luminescence (OLPL) material consisting of only two simple organic molecules that are easy to prepare without rare elements. Previous OLPL materials were based on photoionization and therefore required high excitation intensity and also in low temperature environments. The OLPL reported in this study can be excited by a standard white LED light source, and can emit light at a temperature higher than 100 Â° C. The OLPL system is transparent and soluble, and is expected to be used in flexible coatings, biomarkers, and organic semiconductors. 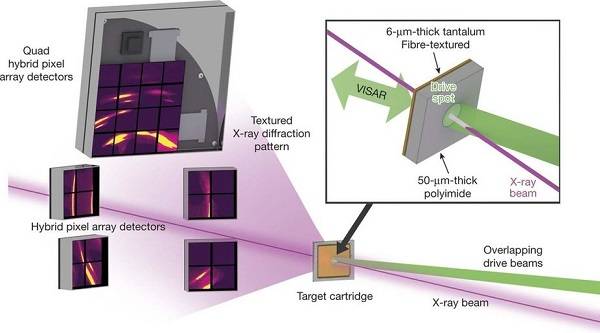 CE Wehrenberg (communication author) and others at the Lawrence Livermore National Laboratory in the United States used in-situ XRD testing to conduct a deeper analysis of the dynamic properties of the material, and studied the competitive deformation mechanism of the material, revealing the lattice level. Shock wave driven microstructure deformation process. The pressure shock wave causes the solid material to deform, and the mechanism of plastic deformation at the lattice level is twinning and slip deformation. Studies have found that twins and associated lattice rotation occur only in tens of picoseconds. In addition, under high pressure, plasticity dominates from twin dominance to dislocation slip. This technique can be used to study other strain mechanisms driven by shock waves.